Greater engagement from oil and gas employers is needed in order to retain industry workers.

A Petroplan representative shared Ferguson’s views on retaining oil and gas staff, telling Rigzone that more needed to be done by companies to appease employees.

“There needs to be dialogue going on between companies and their employees giving them that sense of community and a sense of security,” the spokesperson said.

The recently released Talent Insight Index revealed that over 75 percent of oil and gas industry professionals are ready to move jobs.

“Employers need to give them reasons to stay … The retention of good mid-career people in the sector is at threat,” the report claimed.

Looking to the future of the industry, Ferguson also outlined some concerns regarding the next generation of oil and gas professionals.

“It’s probably fair to say the appetite in some of the younger generation isn’t probably leaning towards oil and gas in the way that it might have a few years ago,” Ferguson said.

“I think there’s a really, really interesting pinch-point coming our way in terms of the availability of relevant talent in this sector,” he added.

In an effort to get millennials interested in the industry, Ferguson suggested a marketing change for oil and gas.

“It’s an easy villain in today’s world … I just don’t think we promote ourselves in this sector particularly well,” Ferguson said.

“What is the industry’s contribution to the world today? … I bet there’s not many industries that probably spend more on conservation for example, than oil and gas, but do we talk about that? No, we don’t … there’s definitely work to be done,” he added.

A Petroplan representative even suggested that the next generation of oil and gas professionals could help the environmental cause via the industry.

“If you look at the younger generation, they are more environmentally aware than any generation before and there’s huge opportunities for them to use their talent through digitalization to ensure that the future of the oil and gas business is even more environmentally friendly and sustainable going forward,” the spokesperson stated.

Petroplan’s report also outlined that the emergence of digitization and Big Data has increased the need for IT skills in the sector, with 34 percent of respondents citing that these are a growing requirement.

As a result, the report outlines that attracting digital natives to the sector is a priority.

“The apprehension for the oil and gas sector is that the skills required for this new age of digital oil and gas fields differs vastly from what has long been the traditional skillset,” the Talent Insight Index stated.

“To elevate the skills of the workforce will require a combination of recruiting fresh talent from outside the oil and gas sector, including data scientists, software engineers and other digitally savvy professionals, as well as teaching new skills to the operational staff already within the industry,” the report continued. 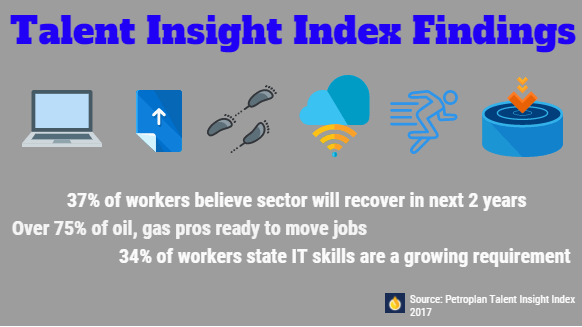