Maybe not, but certainly for a long time – according to the new published U.S. Renewable Energy Brief.

The Brief, published by CohnReznick Renewable Energy Industry and CohnReznick Capital, concludes that the renewable energy tax equity market is in an extremely healthy state, and is growing yearly. $11 billion was raised or committed in 2016, up significantly from the $6.5 billion in 2013, according to J.P. Morgan.

New investors continue to enter the market. There are now over 45 active providers of tax equity for renewable systems. Older providers are becoming more comfortable and confident that the market will continue to grow for some years, especially since Red States get more renewable subsidies than Blue States.

The five states that get the largest percentage of their power from wind – Iowa, Kansas, South Dakota, Oklahoma and North Dakota — all voted for Mr. Trump. So did Texas, which produces the most wind power in absolute terms. In fact, over two-thirds of the wind power produced in America comes from states that Mr. Trump carried in 2016.

In addition, one has only to look at the states and their renewable portfolio standards to see the continued drive for more renewable development.

‘This is a good time to be a developer,’ says Anton Cohen, Partner & National Director of the Renewable Energy Industry practice at CohnReznick. ‘The prospects for project sponsors in the renewable energy market is at all time high both near and long term. The tax equity market is expanding and becoming more fluid with the influx of regional banks and insurance companies. In addition, there is so much capital out there just waiting to invest in developer platforms or acquire projects at various stages of development.’

And it’s not just government and electric utilities. The number of projects with corporate Purchase Power Agreements (PPAs), where a corporation such as Amazon or Apple is buying the power rather than a traditional utility, is increasing significantly, further establishing a firmer foundation for this particular equity market.

In 2016, about 1,560 MW of renewable power was contracted under corporate PPAs.Enel Green Power’s 400 MW Cimarron Bend wind project secured $500 million of tax equity in September 2016, with Google contracting for half of that power. The 253 MW Amazon Wind Farm secured tax equity from Bank of America Merrill Lynch and GE Energy Financial Services, largely because Amazon is purchasing 90% of its power output.

The financiers of the renewable energy market have proven to be resilient through the constant challenges and evolution of the market over the last ten years, and they will evolve as necessary to support the continued expansion of renewable energy.

CohnReznick Managing Director Nick Knapp, a specialist in structuring utility scale wind and solar equity, declared, ‘Renewable Energy has passed its inflection point in the United States. Its status as a reliable and long-term power generation solution is no longer in question.’

But tax credits are still critical in maintaining renewable energy’s expansion (see figure below). Whenever they expire, the industry stops and waits for them to be re-authorized. 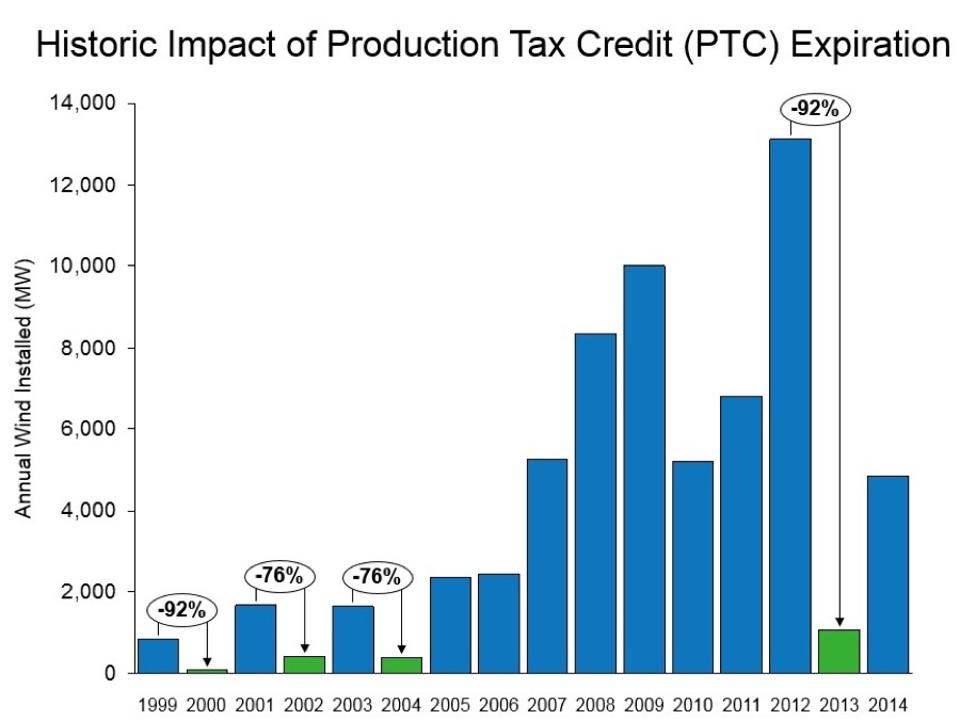 Renewable tax credits are essential to continued expansion of the renewable energy market, and removing uncertainty is critical for market stability.

Then there’s distributed generation, like the solar array on my own roof, which was made affordable only with tax equity provided by the State of Washington as well as the Feds.

Although large residential developers, such as SolarCity, Vivint Solar, and Sunnova, have secured hundreds of millions of tax equity finance dollars during the last several years, distributed generation projects struggle to get tax equity because most are so small, even if they have strong sponsors and buyers of their electricity. The shortage is most acute for projects needing less than $25 million.

‘While the utility scale renewable market is at a more mature stage, on-site generation is just scratching the surface,’ says Cohen. ‘There is a very bright future for the development of distributed generation projects and once storage really takes off, it might be hard to compete with cost of energy driven by solar and storage.’

Even in traditionally challenging merchant markets like the Texas panhandle that are notoriously difficult to finance, renewable investors have succeeded with hedge agreements in place that provides investors with some certainty on the cash flow for that specific renewable project.

So, with the help of tax incentives, renewables are here to stay. The real issue is how much they will penetrate the overall power market before the inherent problems with intermittency runs into our demand for a reliable grid.

Another question is – how long will taxpayers support these tax credits?