Singapore has been ranked top in Asia for developing human capital in a new report by the World Economic Forum (WEF).

It ranks 11th out of 130 countries, having developed 73 per cent of its human capital as measured by WEF’s Human Capital Index.

The only other nation from the region in the top 20 is Japan, ranked 17th.

The Global Human Capital Index 2017 ranks 130 countries on how well they are developing their human capital across four dimensions – capacity, deployment, development and know-how – as well as across different age groups.

The report found that the world has developed only 62 per cent of its human capital as measured by the index.

This means nations are neglecting or wasting, on average, 38 per cent of their talent. 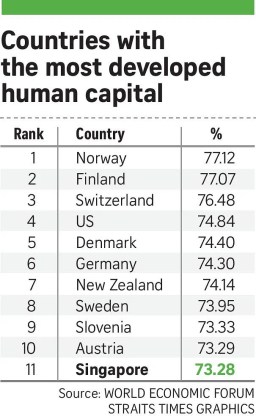 The United States and Germany are among the best-performing nations in a top 10 dominated by smaller European countries.

The report found that investments in education often fail due to inadequate focus on lifelong learning and a mismatch of skills required for entering and succeeding in the labour market.

In countries which have been the most successful at drawing on their people’s know-how – such as Switzerland and Singapore – most people work in high-skilled and expertise-based occupations and do so within a complex, diversified economy.

Singapore combines the world’s second-highest proportion of high-skilled employment with significant strengths in the quality of its education system and staff training, the report noted.

Key areas for improvement include boosting labour force participation rates among older workers and getting more women into work.

The country ranks 60 or lower for its employment gender gap in all relevant age brackets.

“To break into the global top 10, (Singapore) would benefit from fully realising the human capital boost that would come from addressing the nation’s employment gender gap as well as from further improving the inclusiveness of its education system.”