A decade from now, the American economy could look much the way it does today — only more so. More dominated by the service sector amid the continued erosion of manufacturing jobs. More polarized in both earnings and geography. More tilted toward jobs that require at least a bachelor’s degree.

That, at least, is the future foreseen by experts at the Bureau of Labor Statistics. The federal agency on Tuesday released its projections of what the United States employment picture will look like in 2026. (The estimates are based on long-term trends, not the short-term strength or weakness of the economy.)

The projections reflect some familiar patterns. Jobs in health care and clean energy will continue to grow rapidly. Manufacturing jobs will shrink, as will occupations involving data entry or other tasks that are increasingly being done by machines or algorithms. Overall job growth will continue to be slow, partly as a result of the aging of the baby boom generation; by 2026, even the youngest boomers will be approaching retirement.

Where the jobs are… 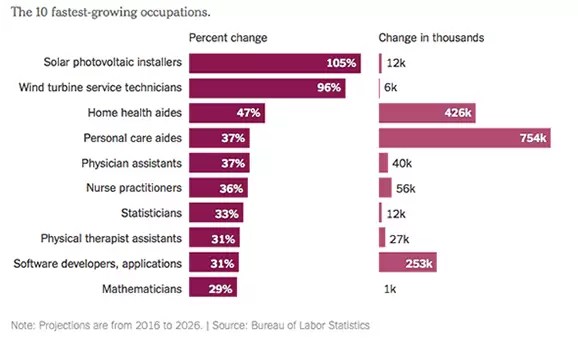 … And where they aren’t 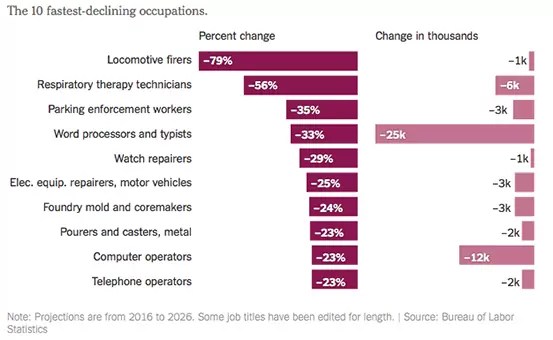 Those trends don’t matter just to economists. The government’s projections, released every two years, are used by school guidance counselors to advise students, by colleges to design curriculums and by work force development agencies to direct displaced workers into training programs.

The projections aren’t perfect. A decade ago, the Bureau of Labor Statistics underestimated the impact of the rise of e-commerce on retail employment, and it projected a big increase in office clerk jobs that, because of automation, never came. But the government’s experts accurately foresaw many of the most important employment trends, including the growth of jobs in health care and computer programming and the continued decline of blue-collar jobs in manufacturing.

Tuesday’s report suggests that the polarization that has increasingly defined the United States economy will only increase over the next decade. High-paying jobs in health care, computer science, and other fields heavy in math and science will grow quickly; so will low-paying jobs caring for older adults or waiting on tables. But continuing a decade-old trend, many job categories in the middle of the pay spectrum are growing slowly or disappearing.

Particularly vulnerable are jobs with decent pay that require less than a college degree. And even a bachelor’s degree is no longer a guarantee of success: The greatest job growth over the next decade will be in occupations requiring a graduate or professional degree.

The nation’s geographic divides are likewise expected to become wider. The fastest-growing categories are concentrated in large urban areas, especially on the coasts. Small-town America will most likely continue to struggle. Those economic trends have political ramifications: Occupations expected to shrink over the next decade tend to be in counties won by President Trump in 2016, according to an analysis of the data by Jed Kolko, chief economist of the job-search site Indeed.com.

“Continued polarization is the story,” Mr. Kolko said. “Not just in wages but also in geography and therefore also politics.”

Many of the jobs expected to disappear over the next decade are in industrial jobs that have long felt the dual squeeze of globalization and automation: metalworkers, coal miners and machine operators, particularly those without specialized skills.

But the impact of automation is increasingly spreading to the service sector as well. Government economists expect steep declines in employment for typists, telephone operators and data-entry workers. Even jobs that might once have seemed relatively secure, such as legal secretaries and executive assistants, are expected to decline in coming years.

At the same time, technology is creating new opportunities for statisticians, engineers and software developers — the workers developing the algorithms that are changing the global job market.

The Demographics of Change

Men bore the brunt of the first wave of automation. That is changing as the trend shifts to the service sector, however; several of the occupations that are expected to decline in coming years are dominated by women, including many office administrative jobs.

Women may not be net losers in the changing economy, however. Women hold a disproportionate share of jobs in many of the fastest-growing categories. Some of those jobs pay little, such as waitresses and nursing assistants. But women also dominate many well-paid and fast-growing occupations in nursing and physical therapy, among others. And while men are also overrepresented in some growth sectors, they will most likely show slower overall employment growth than women in the years ahead.

None of these patterns, of course, are set in stone. As the economy shifts, social and cultural forces shift with it; men, for example, are increasingly going into fields like nursing that were once seen as women’s work. (Research has found that when they do enter such occupations, men tend to be promoted more quickly than women.) And parts of the country that lost out in the decline of manufacturing are now attracting warehouse jobs tied to online shopping. Such adjustments are happening only gradually, however, even as the economy is changing rapidly.