Home » News & Events » Are the disruptors about to be disrupted by regulators?

By: Tong Kooi Ong
SINGAPORE (Mar 26): This has been another eventful week for global stock markets. Crucially, I wonder if this is not the turning point in terms of regulation for many big tech companies, an industry that has thus far thrived with minimal oversight. Are digital disruptors about to be more regulated?
First up, I disposed of all of my Facebook shares and a quarter of my holdings in DIP Corp. 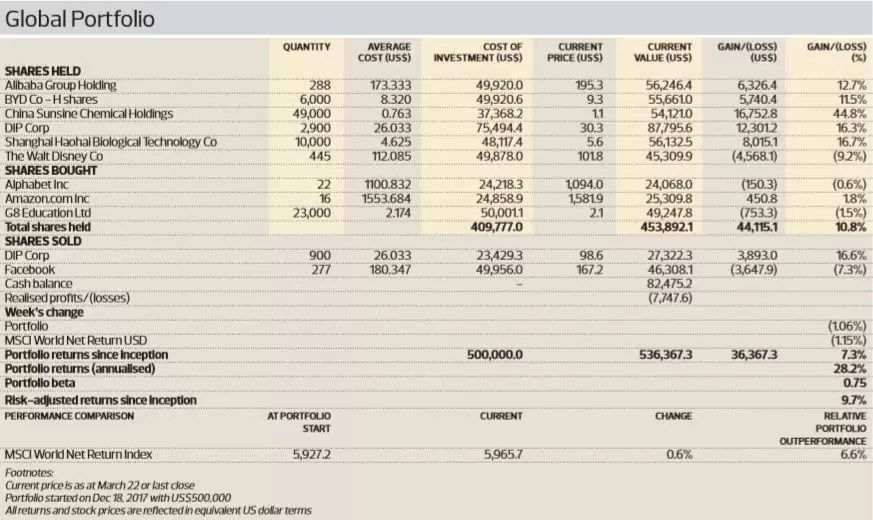 I made a big investment in DIP, double the typical amount I would invest per stock and it has paid off. Its shares have performed well, rising as high as ¥3,550 just prior to the global market selldown. Therefore, I have decided to gradually normalise my investment in the stock and also to lock in some profits.

The company reported a good set of earnings results for the latest quarter ended November 2017. Earnings before interest, taxes, depreciation and amortisation (Ebitda) for the quarter were up an outsized 27% y-o-y compared with the 14% revenue growth on the back of improving margins.

In fact, this underlines the basis for my upbeat outlook for tech companies — the benefits of the network effect, limited supply constraints for those with digital-focused businesses and long-term marginal cost that approaches zero.

What could upset this apple cart? Regulatory challenges.

Government scrutiny in the US and EU — especially as it pertains to the collection and protection of a vast trove of personal information — has been on the rise, but never more intense as the investigation into Russian meddling in the 2016 US presidential election unfolds.

In particular, lawmakers are examining the role of social media platforms in the dissemination of fake news and, this week, the revelation of how a British-based data analytics company misused the personal data of up to 50 million Facebook users to influence the election.

Facebook is at the forefront of this regulatory backlash — and may well be the first to feel the real impact of any legislative fallout. The stock was heavily sold down after news of the data misuse came to light. I believe this selldown is justified. The impact of the resulting regulations will have a significant impact on Facebook’s revenue and profits.

For those of you who remember, it was the US government that forced the break-up of AT&T (affectionately known as Ma Bell) in 1984, then the world’s largest telco monopoly. It, too, was benefiting from the network effect and appeared then to be in an insurmountable position.

I bought Facebook shares because they offered the best value and the company has the best business model among the big tech companies. Revenue growth is strong and margins are holding up. Marginal costs are minimal, unlike for Amazon.com and Alphabet, which are spending heavily on new investments, including physical assets that will drive down returns on equity.

All these are still true. But given the rising regulatory and legal risks, I have decided to cut my losses. Nevertheless, I still believe that tech companies are reasonably valued relative to their prospective growth. Hence, I am reinvesting proceeds from the sale of Facebook into shares in Amazon and Alphabet, both of which are household names that require little introduction.

Amazon is the largest e-commerce player in the US, though most of its profits currently come from the cloud computing business. The company is also investing big in physical stores, warehouses and distribution logistics. I think their biggest promise is in creating a new home ecosystem. I will explain more on this in the future.

Alphabet, meanwhile, derives most of its revenue and earnings from advertising. It has numerous platforms with a huge user base, including YouTube, Gmail, Google Maps, Chrome and Android, plus big side bets on AI and autonomous cars.

I also acquired about US$50,000 ($65,623) worth of shares in G8 Education, which is listed on the Australian Securities Exchange and is the country’s second-largest operator of day care and education centres for children aged below five. Most of its 495 centres are located in New South Wales and Victoria, with another 21 in Singapore.

G8 has grown its Ebitda at an impressive annual pace of 37% up until 2017 on improving margins. Last year, growth stalled, owing to increased competition, and its share price fell sharply in response.

I believe G8’s outlook will improve this year, underpinned by mature contributions from the 58 centres acquired in 2016 and 2017. The company also undertook refurbishment and improvement works at many of its centres last year as well as staff upskilling to meet more stringent regulatory requirements. G8 benefits from economies of scale, including from procurement, staff training and placements.

In addition, the government’s new Child Care Subsidy (that will come into effect in July 2018) will raise subsidies for low-middle income families, which should in turn boost demand for childcare services.

The company generates positive free cash flow and distributes 75% of its annual profits as dividends. At current prices, that will give shareholders an estimated yield of over 6%. Its shares are trading at only nine times trailing EV/Ebitda and 15 times price-to-earnings ratio (see Charts 1 and 2). 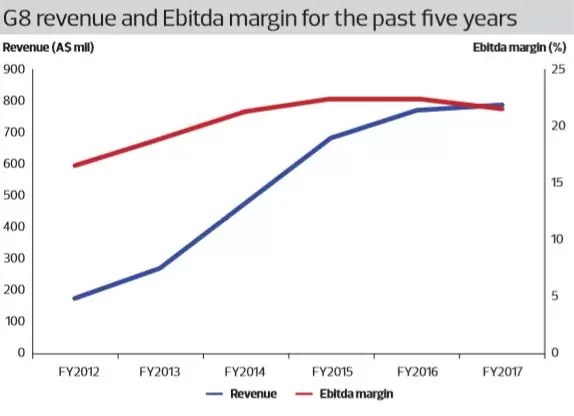 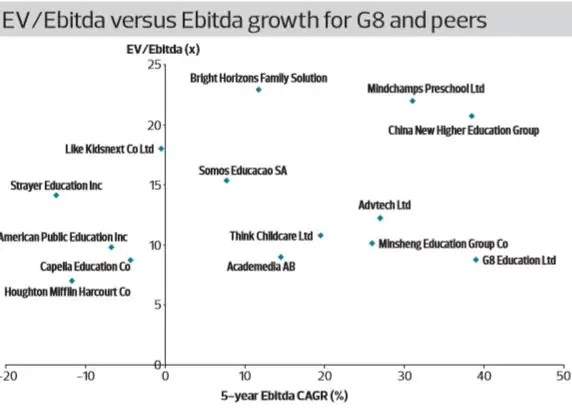 After taking into account all the above transactions, cash in the Global Portfolio was reduced to about 16% of total portfolio value. The Global Portfolio is now up 7.3% since inception and continues to outperform the benchmark index, which is up 0.6% over the same period.

Meanwhile, I continued to reduce my exposure for the Malaysian Portfolio. My cash holdings have now increased to RM91,477 ($30,722), or about 28% of total portfolio value.

As I have said previously, my recent disposals were driven by macro considerations and not stock-specific ones. The aim is to be prudent and raise some cash that will give us more room to manoeuvre once the global markets stabilise.

Table 1 shows select emerging market index and currency movements since the global selloff. Notably, countries such as the Philippines, Indonesia, China and Mexico have suffered more than their fair share of pain in the equity selloff, while most emerging market currencies too have depreciated against the US dollar over this period. 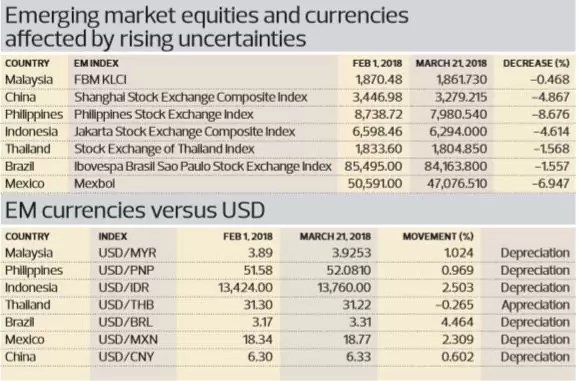 Increased market volatility usually results in investors turning more risk-averse and pulling money out of perceived riskier emerging markets. In addition, many emerging economies are still heavily dependent on exports and are therefore weighed down by rising concerns of a brewing trade war.

Tong Kooi Ong is chairman of The Edge Media Group, which owns The Edge Singapore

Disclaimer: This is a personal portfolio for information purposes only and does not constitute a recommendation or solicitation or expression of views to influence readers to buy/sell stocks, including the particular stocks mentioned herein. It does not take into account an individual investor’s particular financial situation, investment objectives, investment horizon, risk profile and/or risk preference. Our shareholders, directors and employees may have positions in or may be materially interested in any of the stocks. We may also have or have had dealings with or may provide or have provided content services to the companies mentioned in the reports.

This article appeared in Issue 823 (Mar 26) of The Edge Singapore.