Home » Economy » Should Singapore banks prepare for another O&G nightmare? 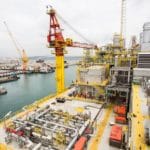 The liquidation process undertaken by crude oil supplier Coastal Oil Singapore is unlikely to result in the previous oil and gas (O&G) downturn that pushed up the banking sector’s bad debt and credit costs although lenders are likely to take a one-off hit, according to CIMB.

The total market value of the Coastal Oil’s assets, roughly estimated at around US$40-45m based on Clarkson Research data, would not be sufficient to cover its debts and result in an earnings reduction for the Singapore lenders, analyst Andrea Choong said in a report. “The read-through from credit costs would dent earnings by 0.3% for DBS, 0.6% for UOB, and 3.2% for OCBC,” she said.

Of Coastal Oil Singapore’s outstanding debts of US$354m, roughly half is owed to Singapore banks with OCBC having the largest exposure amongst its peers at US$122.7m.

DBS and UOB are both owed US$29.9m and US$19.5m respectively however on a net basis, DBS has the smallest exposure after it seized two of Coastal Oil’s vessels, Atlanta and Coastal Neptune in January 2019 on the grounds of US$5.4m and US$3.6m of mortgage claims. On the other hand, O&G loans account for c.5% of UOB’s loan book with most of the exposure in the downstream segment, highlighting the minimal impact from the liquidation.

Although Coastal Oil Singapore’s troubles brings to mind the O&G downturn in 2016, Choong waves off concerns that banks will face another round of portfolio clean-up that happened in the second half of 2017 to account for larger bad debt.

“We do not think that Coastal Oil’s liquidation is indicative of more material deterioration in the sector,” added Choong.

The post Should Singapore banks prepare for another O&G nightmare? appeared first on Opus Kinetic.