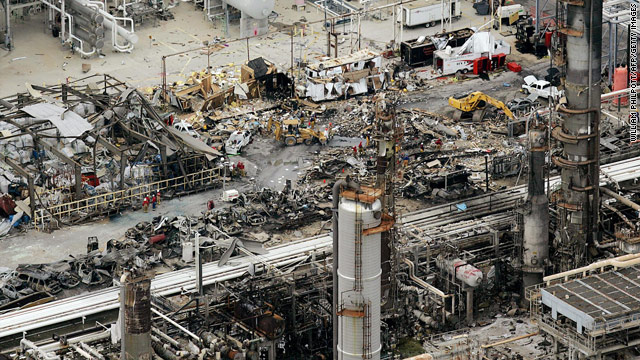 On March 23, 2005, one of the worst industrial disasters in recent U.S. history occurred at the BP Texas City Refinery. The disaster that took 15 workers lives and injured 180 others, occurred as a result of an explosion and fire during the startup of a process unit. A distillation tower was overfilled and liquid and vapor hydrocarbons were released into the atmosphere. A vapor cloud formed, found an ignition source, and exploded.

An investigation done by the U.S. Chemical Safety and Hazard Investigation Board (CSB) who summarized that the accident was caused by “organizational and safety deficiencies at all levels” (CSB, 2007) A historically poor safety culture at the plant was also cited as a key underlying cause of the accident. Ultimately, several latent conditions and safety system deficiencies affected unit operators’ decisions and actions that led to the incident. The broader aspects of this investigation revealed serious management safety system deficiencies that allowed the operators and supervisors to fail.

Here are 3 human-factors issues that contributed to the accident:

Lack of training and manpower competency

Inadequate training for operations personnel led to the incident as operators were not trained on proper procedures to be done during abnormal and start-up conditions. The hazards of unit start-up, including tower overfill scenarios, were found to be not covered in training. This insufficient training was a mix of lack of annual performance appraisals, individual skill development plans, and abnormal situation management simulator training.

The CSB investigation revealed operators consciously deviated from start-up procedures by over-filling the tower. This step was routinely not followed, and an informal procedure had been adopted due to fears of losing level and liquid flow to heater. Generally, most of the start-ups deviated from written procedures, and without knowledge of management. As a result of this lapse, operators continued to rely on knowledge of previous start-ups and developed informal work practices.

The BP Texas City refinery has had a poor safety record, with one of the worst rates of work fatalities. In 2004, 3 major accidents resulted in 3 facilities. This poor safety culture created a poor working environment, where operations personnel are not held responsible for their actions and there were unclear expectations around supervisory/management behaviours.

Integrating Human Factors into Design & Operations Risk Framework is a 3-day training course held from 26-28 November 2019 (Singapore). The course will describe the best practices in the development of competency management systems and how management can identify of the types of human error and pre-conditions that increase the likelihood of error occurrence. Other topics include the ergonomic aspects of the human-machine interface, organisational cultural models and behaviours surveys, the principle characteristics of “High Reliability Organisations”, best practice leadership approaches and more.